Please note: this post contains affiliate links. This means if you purchase a product I link to, I will receive a small commission at NO additional cost to you! Affiliate links are one of the few sources of income that allow me to run this blog. :)

(What a way to start an intro, huh? I promise I didn't make that up by the way).

I'm here with my July 2020 Monthly Faves—a little late, my apologies. As I write some of this, I am in the car on my way back from a trip Thomas and I took to Missouri to visit some of our best friends who just moved down there. Time for writing has been somewhat non-existent.

Anyway, I think I've got some fun faves for this month, so let's dive right in. I hope you enjoy!

Just like last month, our favorite show was The Vampire Diaries. In June it was split between TVD and SpongeBob (which I had started watching distractedly for light entertainment), but in July it was straight vampire binge-ing.

It's become almost a nightly ritual for us: we get home (or finish what we were working on), turn on TVD, and watch enough episodes until I pass out. Then Thomas usually berates me for falling asleep on the couch and convinces my sleepy self to come up to bed with him.

I'm just happy he likes it as much as I do! It's fun to share that same level of enthusiasm with someone. We've gotten through four seasons in the last month or so—pretty good, huh?!

There were two songs I listened to on repeat during the month of July, and ironically, the first one is called "July" by Noah Cyrus ft. Leon Bridges.

It's a quiet song with a lot of raw emotion. It's got a catchy melody and even has some whistling in it. I also love that it's a duet (of course, typical me). One of my favorite lines is when Leon Bridges sings:

Or, sung by Noah Cyrus to the same melody:

My only complaint is that it's too short; it IS only 2.5 minutes, but it's also one of those songs that seems to end before it even begins, which is a sign of how good it is.

The second is "Paparazzi" by Lady Gaga. Talk about a throwback, right?

It's the desperation in the main chorus that made me fall in love with the song. I don't remember what led me to it again, but for some reason, the chorus struck a chord with me (get it? 😉) in a way it must not have when I first heard it years ago.

Plus, the songwriters, Rob Fusari and Stefani Germanotta, did a fantastic job of crafting some unique lyrics very befitting of Lady Gaga's (old) persona—such as:

🎵 Shadow is burnt / Yellow dance and we turn / My lashes are dry / Purple teardrops I cry, it don't have a price / Loving you is cherry pie 🎵

I had no problem blasting this song on full volume on my car's stereo with the windows down, feeling the balmy wind kick up my hair and brush my cheeks.

In a book club I'm in, we read Looking for Alaska by John Green, and I can confidently say I was pleasantly surprised by this novel.

In simple terms, it is about a high school boy named Miles Halter who decides to attend a boarding school his father attended called Culver Creek. He is in search of a notion called the "Great Perhaps" and what might lie behind it. At Culver Creek, he meets new friends who arguably fall outside of his comfort zone, and we witness how he follows along with their shenanigans, falls for a depressed yet clever girl named Alaska Young, grows as a person, and deals with human tragedies like grief.

The book is divided into "before" and "after" sections that pivot around a central event, which is one of the novel's unique characteristics. I found the "before" half to be comprised largely of world building, and there is a lot of action and development in this part. The "after" section is very introspective; it certainly made me think a lot.

Some of my favorite quotes are below (page #'s match with my copy):

1. "I never liked writing concluding paragraphs to papers—where you just repeat what you've already said with phrases like In summation, and To conclude. I didn't do that—instead I talked about why I thought it was an important questions. People, I thought, wanted security. They couldn't bear the idea of death being a big black nothing, couldn't bear the thought of their loved ones not existing, and couldn't even imagine themselves not existing. I finally decided that people believed in an afterlife because they couldn't bear not to" (pg 100).

2. "So she became impulsive, scared by her inaction into perpetual action" (pg 120).

In my July Boxycharm, I received a product—or a tool, rather—called a "Quick Color Switch Dry Makeup Brush Cleaner" by Lavish (talk about a mouthful). Despite being VERY dubious of its effectiveness and worth at first, I actually found this $20 item to be pretty fantastic.

I won't spill much about it here, but if you want to read more about it, or see what else I got in my July Boxycharm, check out this post: Boxycharm Unboxing | July 2020

Erm, let me explain this further.

So I haven't just been drinking cups of latte foam—that would be a little strange, even for me.

What I DID do is follow this recipe by Oh, How Civilized for a lavender Earl Grey tea latte (or in other words, a lavender London Fog). Their blog is SO cool; it teaches you about different kinds of drinks made with tea. It's quite educational.

Surprisingly—for how much I like coffee—I've never frothed milk at home. But when the post talked about how you could froth milk using a French Press, which I do oddly enough have (even though I don't own a basic milk frother??)—I had to try it.

And it worked! So I spent a fair portion of the month making all different kinds of coffee & tea drinks and "pumping" my own froth with a French Press.

We don't need to discuss how much easier it would've been to just BUY a $7 milk frother. 😅

Picture quality wasn't the best, but here's a selfie I took of these simple yet elegant earrings. The gold loops have a wavy texture, as do the faux pearls, adding more character to the earrings as a whole.

They're light-weight, and best of all, only cost me $4 in a set with some pearl hair clips that I snatched near the H & M checkout counter. #SOLD

I've gotten a fair number of compliments on them already!

So apparently, Marshall's has the BEST jeans. Is this news to you too, or do I just live under a rock? I'm assuming the latter.

I got 3 pairs of jeans from Marshall's for $10-$12 each, and I have found myself reaching for them repeatedly—as opposed to before when I couldn't be bothered with jeans because they were too uncomfortable.

I should probably note that it's not the brand "Marshall's" that makes the jeans; Marshall's is just the hub where they sell clothes by other companies (many high-end ones!) for good prices. I have noticed that a lot of the jeans I've liked have been by d. jeans because they've got a nice stretch quality to them.

I also purchased a $3 bodysuit and a $6 pair of pants from Marshall's (both shown below), as well as some $20 bathing suits. I've decided I must maintain my distance from that store before I go broke, lol. 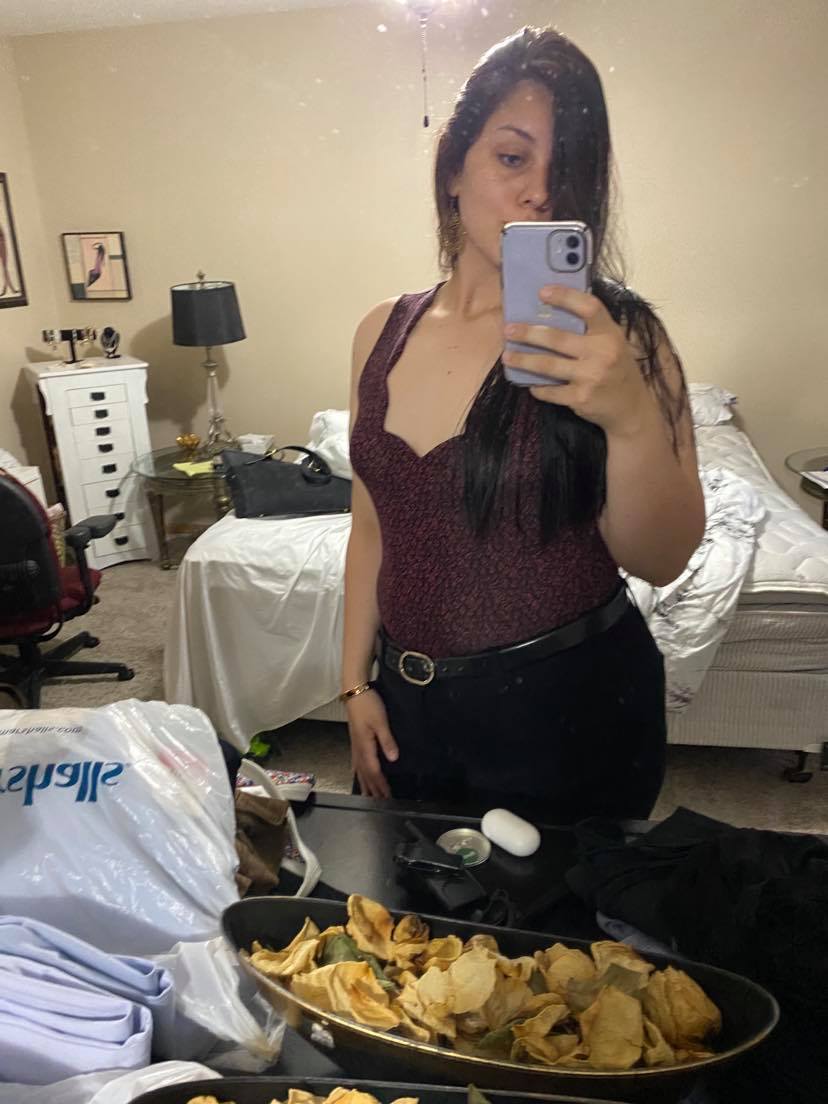 In addition to this blog, I'm also working on establishing an Etsy shop and a YouTube channel. One of my primary goals is to expose myself on as many platforms as possible, both for exposure and to fulfill different dreams. :-)

My Etsy shop will be closely tied with my blogging brand and will therefore be called "from Farrah's." See what I did there?!

I aim to sell gift-style items that people would like to buy for others and would appreciate receiving themselves—products I would be happy receiving. Products made with heart.

I've been working on photos on wood, as shown below (a gift I made for that same friend who moved):

Not saying I've perfected it yet, but everything's a work in progress, right? I've also been working on soaps, water-colored mugs, etc. I'm excited!!

9. Change: Getting my cartilage pierced

For Courtney's (another one of my closest friend's) birthday, she and I got piercings! She got her navel done while I got my cartilage on my left ear pierced.

Between all the friends' birthdays, accomplishments I've witnessed, and just general festiveness I've felt, I have used this emoji way more than usual!

One of my absolute favorite photos from July that made me chuckle a few times was this one of baby Cameron. (If you don't know/remember who he is, check out my May 2020 Monthly Faves to recap on when I met this cutie!)

I've come to realize that, much like his father (😉), he can wear a grumpy expression without intending to. And it's the most charming grumpy face ever. 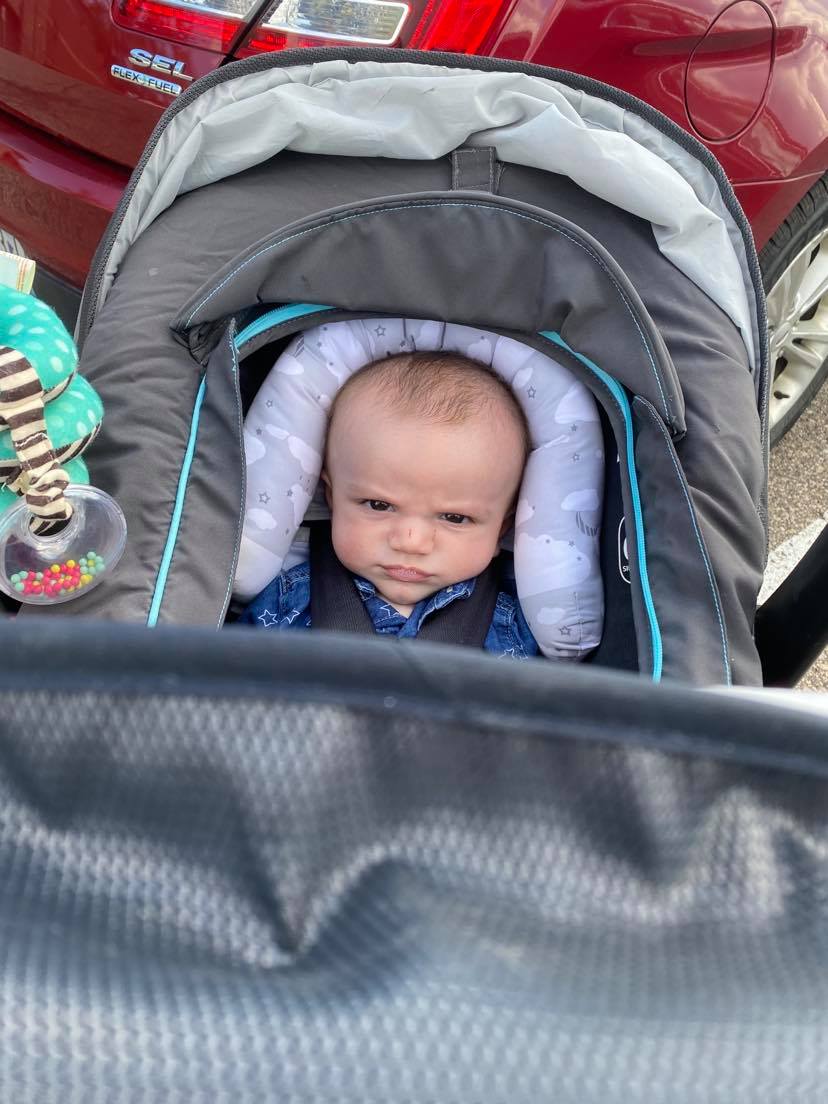 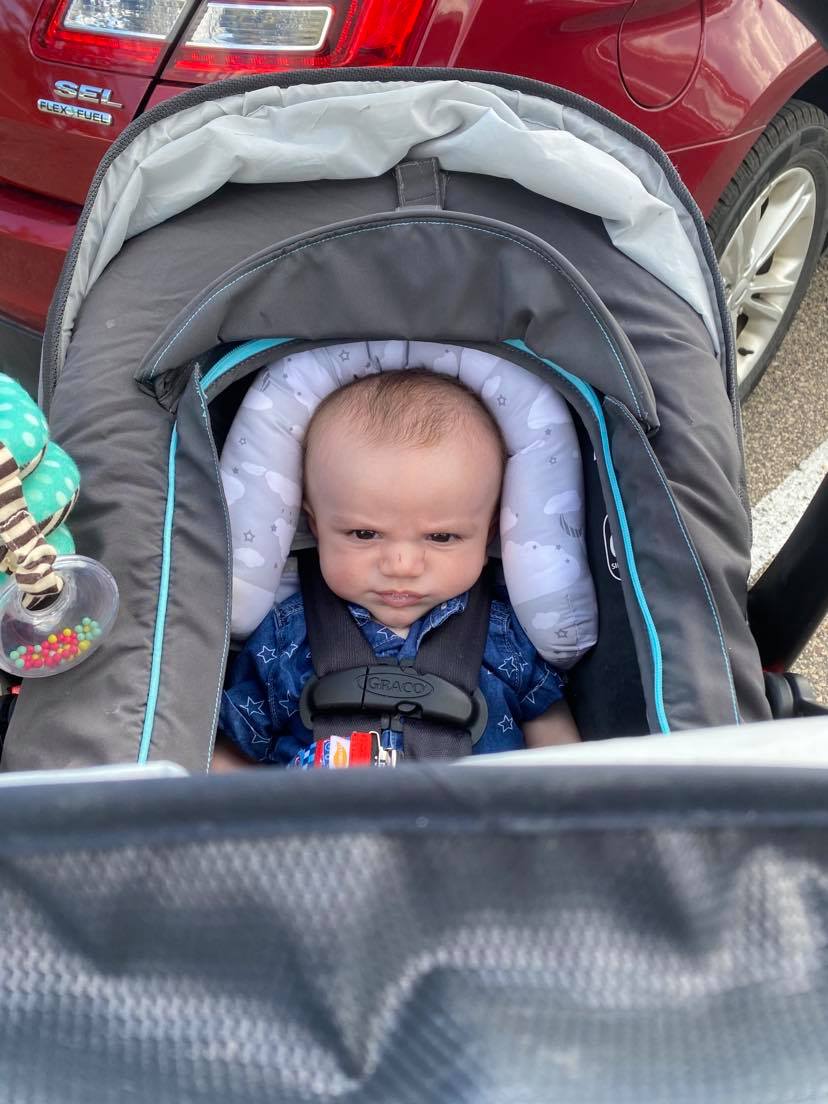 Not long after, he was smiling again! 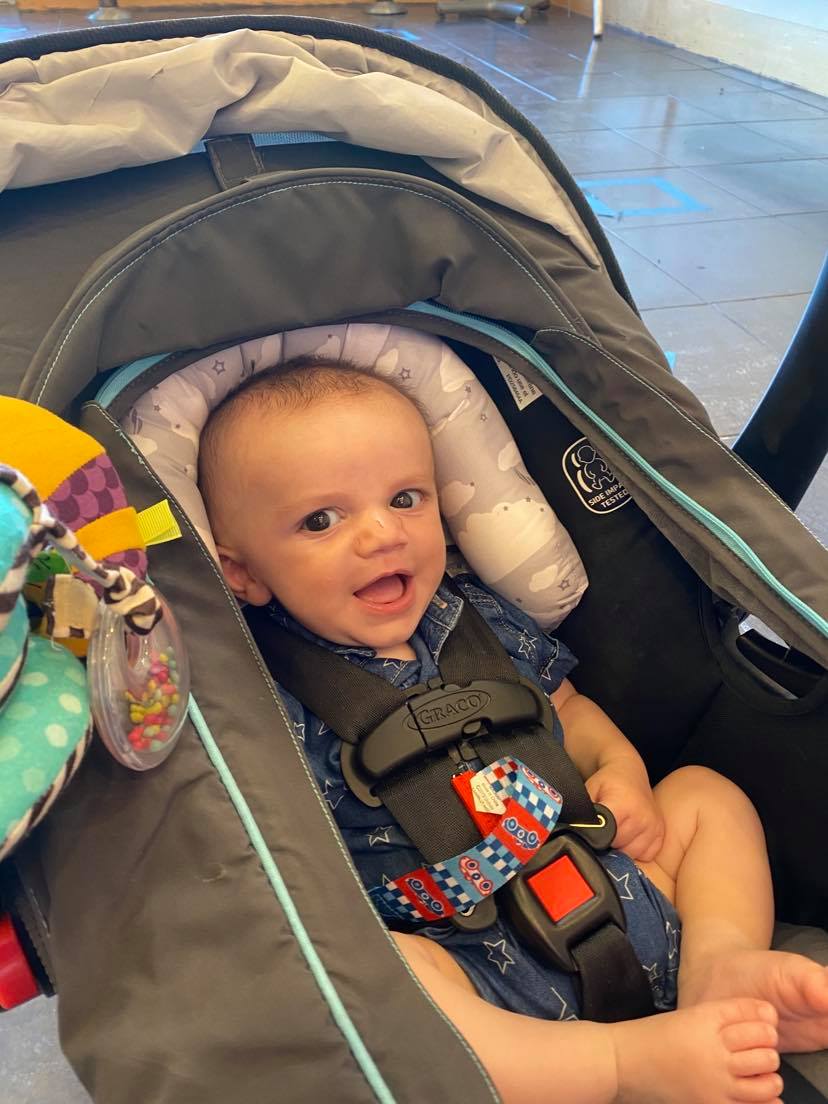 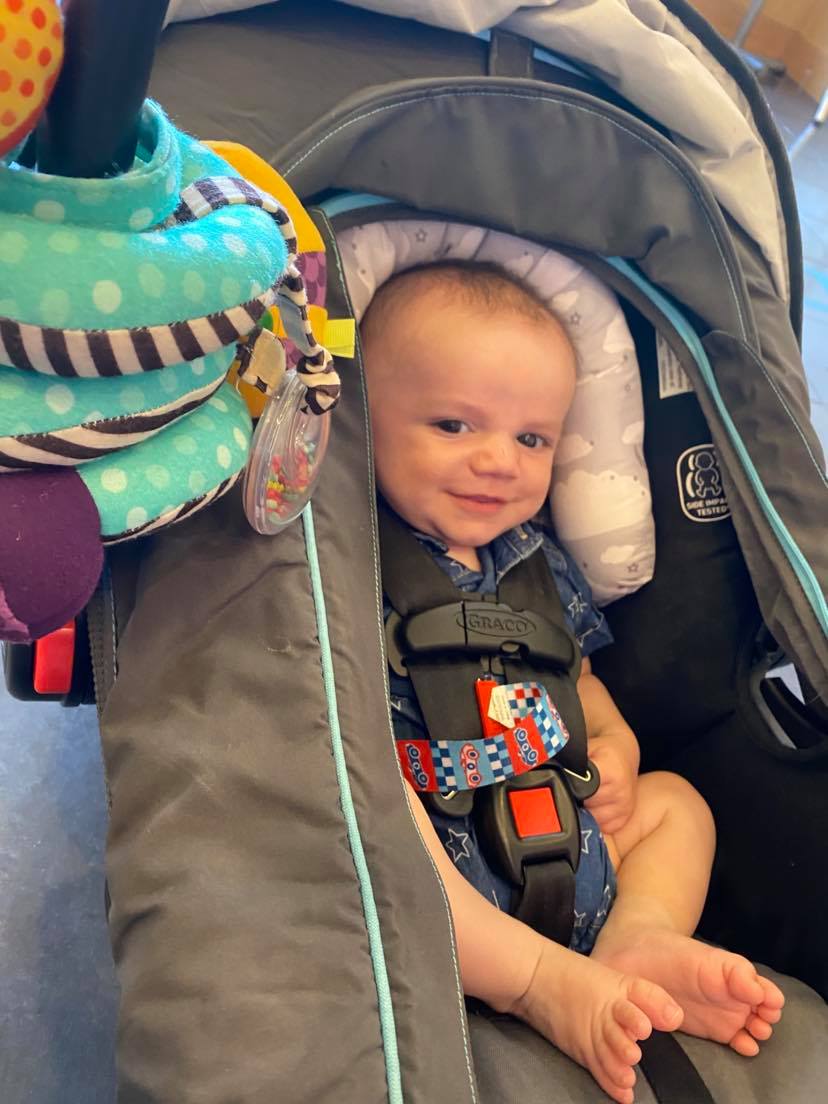 If you liked this post and want to read my Monthly Faves from June, check out this post.

And, as always, I'd love to hear about your July favorites too!

How to Maximize Your Potential | Talk-It-Up Tuesday

20 Things to Know Before Flying for the First Time